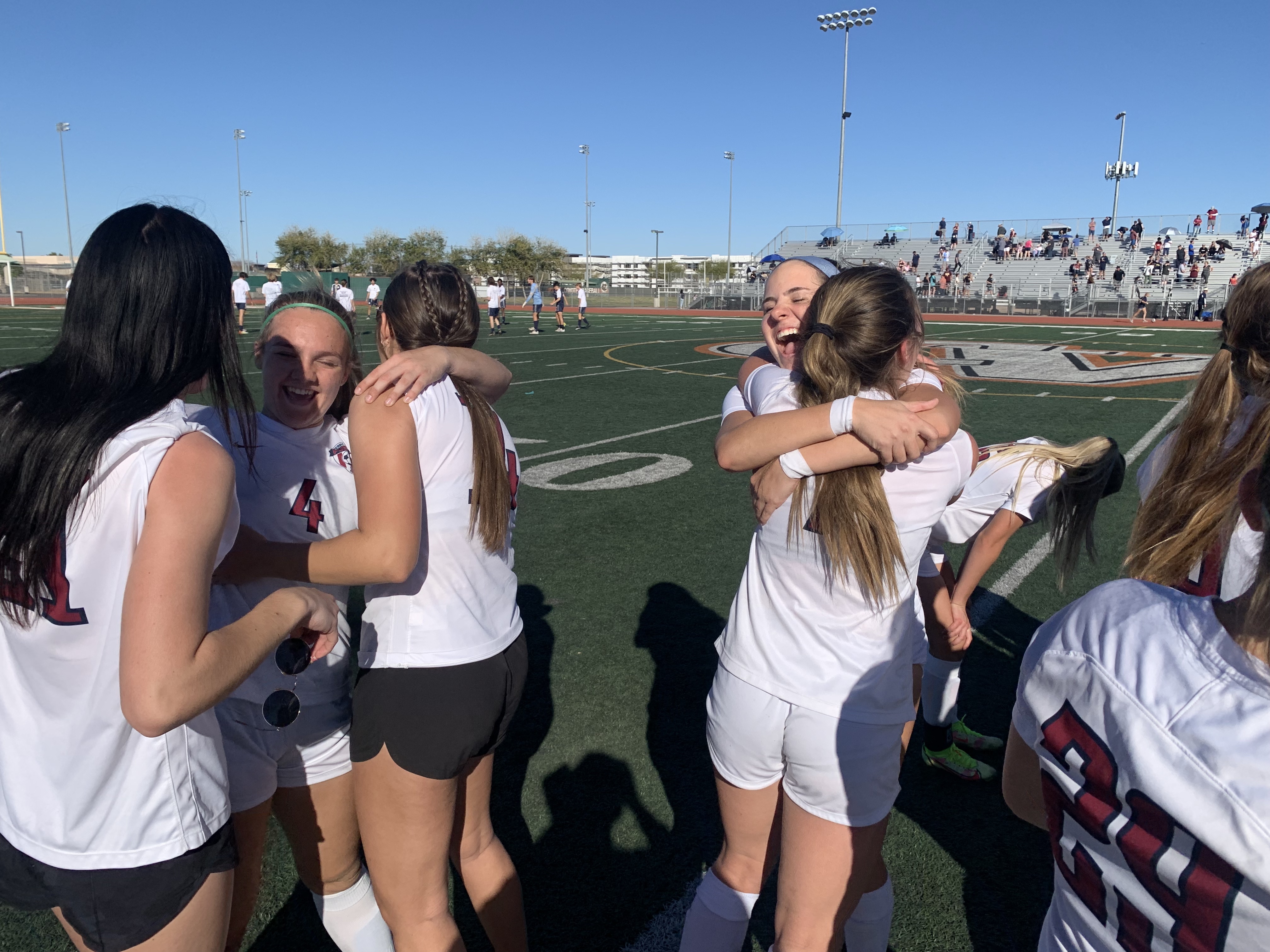 Multiple Pumas embrace on the field after the final whistle. (Adam Schwager/AZPreps365.com)

Adam Schwager is an ASU Cronkite School of Journalism student assigned to cover the 6A girls soccer semifinals for AZPreps365.com

GILBERT — On a Saturday afternoon at Campo Verde High School, the No. 2 Desert Vista girls soccer team was unlucky.

And they were incredibly unlucky when, mere minutes after equalizing the game, freshman goalkeeper Paola Perez lost a high fly ball in the 4 p.m. desert sun, giving the Pumas their game-winning second goal in the 72nd minute.

The word unlucky gets thrown around a lot in soccer. Even “Ted Lasso” satirized the overuse of the term in the show's most recent season.

In the episode, Ted asks his assistant coach, “Back home, if a team was playing poorly, we don't call 'em unlucky. What do we call them, coach?” His assistant chimed in with the clearly coordinated response, “The New York Jets.”

The American mindset is that teams don’t get unlucky. The better team wins the game, clearly. That mindset could be seen behind Desert Vista coach Chris Klein’s first words to the media after the game.

“We gotta finish our opportunities,” he said.

Misfortune was the theme of the season for a team that overcame multiple obstacles to even reach the final four in the 6A division.

In the preseason Desert Vista's most experienced goalkeeper, junior Addison Burlingam-Grissom, broke her foot, leaving Perez to start as a freshman. The Thunder then missed multiple weeks of practice due to COVID-19. Their original head coach, Marvin Hypolite, did not finish the season with the program, forcing Klein, the JV coach, to step in and fill his shoes.

Nevertheless the Thunder had a team with eight seniors committed to play college soccer, including standout Sarah McCarthy, who plans to play at the U.S. Naval Academy in the fall.

The star-studded Thunder roster kept the ball in the Perry defensive third for nearly the entire game. There were chances aplenty for Desert Vista, while counter-opportunities were few and far between for the Pumas.

The first Perry goal came off a weird scenario where nearly half a dozen girls converged on a ball in the middle of the field about 10 yards out from the edge of Desert Vista’s box. Last touched by Perry senior Lilia Sauter, the ball ended up in the back of the Thunder’s net, giving the Pumas a 1-0 lead.

Late in the first half, McCarthy had two prime opportunities to equalize off free kicks, with the first striking the crossbar and the second being saved by an outstretched Lexi Saveski, the Perry keeper.

Halftime here with Perry still leading 1-0 despite numerous chances from the Thunder, including this free kick from senior Sarah McCarthy, just one minute after she hit the crossbar on a free kick just a bit further back. pic.twitter.com/U1J8r2cElB

After a slew of opportunities, Desert Vista finally broke through in the 66th minute after Kaylyn Rogers found teammate Mya Fortun in front of the net off a Madilyn Makay corner kick.

Drama in the desert: Desert Valley scores an equalizer with 14 minutes left in the state semifinal. Senior Mya Fortun with the rebound strike off of corner to square the score at 1-1. #AzPreps365 pic.twitter.com/PPoYrXkKpc

A couple minutes later, a Puma attacker had a nasty collision with Perez that shook up the goalkeeper and forced her to leave the field for quick repairs. Perez was able to return quickly, receiving an ovation from the Thunder sideline as she jogged back into the field of play.

However, her heroic re-entrance was short-lived when she had trouble fielding a ball that shot up into the air, falling behind her and into her net. All of the momentum the Thunder had built up evaporated as most of the Desert Vista bench sat stunned in a brief stunned silence.

Eight minutes later, the final whistle blew. The Pumas rushed onto the field to celebrate their advancement to the state championship game.

Despite the costly mistake, Klein credited Perez for all she’d done throughout the season.

“She did an awesome job for being a freshman,” he said. “I mean, think about it. She was a freshman who had to play with all the seniors and all these huge games. And then you know, we played all these tournaments so she's had a lot on her.”

After the game, even Perry head coach John Roberts acknowledged his team didn’t have its top form, but noted that the Pumas fought when it mattered.

“You give up something late in the game, and it’s deflating as deflating gets and they don’t quit,” Roberts said. “They never quit. We scored with five seconds left against Hamilton to beat him a few nights ago. We tied Xavier with 30 seconds left earlier in the year. These guys don't quit. So that's our team.”

Now the Pumas will face the defending champions, No. 9 Xavier College Prep, who have yet to concede a goal in their four playoff games. The two 6A Premier rivals tied 3-3 earlier in the season, a result which forced the Gators into the No. 9 seed and the play-in round.