Despite obstacles, Eastmark has high financial goals for its programs 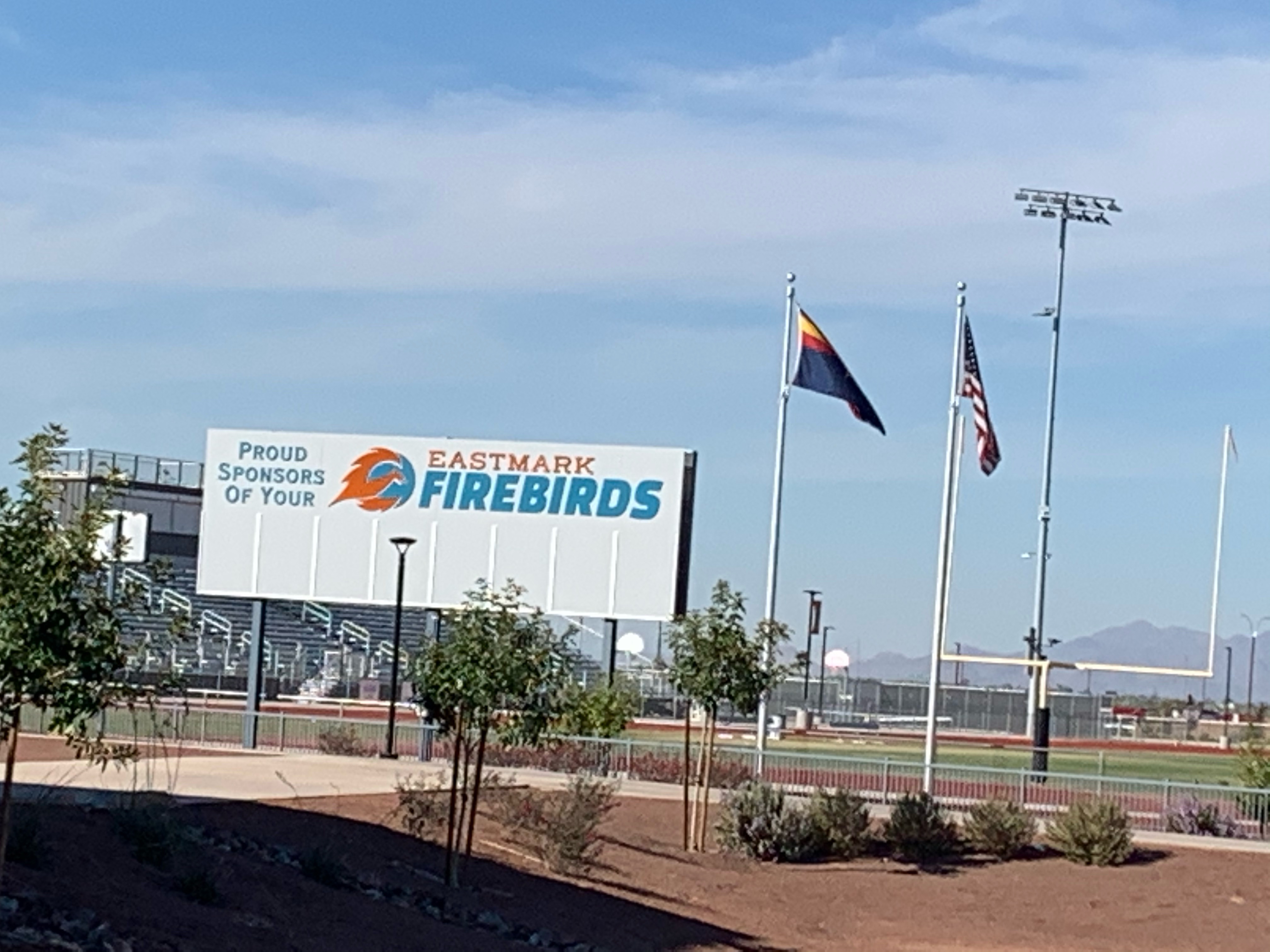 The view from the front office

For several years, funding Arizona public schools has been a hot topic in local communities, in debates about school choice and school vouchers, and in politics. Teachers and supporters stormed the Arizona Capital in 2018 drumming up support for increased funding of schools, but also increasing the noise of their opposition. In 2019 Arizona ranked last in the nation in education funding; on their November 2020 ballots, citizens passed a proposition to increase taxes to better fund public schools.

Eastmark High School, in only its second year, is not immune to the difficulties Arizona schools face when trying to operate expensive athletic programs. However, Eastmark is not letting politics nor COVID-19 impede its ability to get these programs off the ground and to sustain them for the long haul.

Principal Paul Gagnon attributes the pro-active start to Eastmark’s fundraising for its athletic programs to Jim Lamb, director of bond projects and construction for Queen Creek Unified School District, who volunteers within the Firebird athletic program.

“Jim gets to see the game day operation of the facility which helps him see whether or not systems are functioning properly,” Gagnon said. “Seeing the inefficiency of restroom and concession operations helped us secure a building for this purpose before this football season began.”

Eastmark’s inaugural varsity season has been strongly impacted by COVID-19 and proceeds from this new concession stand that was secured due to Lamb’s observations has been negatively affected. Booster Vice President Ally Debbs felt impelled to volunteer at Eastmark because of three key reasons.

“Firstly, I’m excited to be a part of a greater team consisting of many volunteer parents who are committed to the success of their children’s new high school and education,” Debbs said. “Secondly, because football is my son’s passion, it’s mine too. As is true with all sports, the parents grow to be a family and I choose to help teach my son the benefits of being a part of a valuable team and brotherhood. Lastly, because Eastmark is so new, they need people to step up who have experience to help set goals and processes for future generations.”

Debbs remains positive to see her son, Daunte, a sophomore on the football team, along with the rest of the Firebird team succeed even though COVID-19 has severely affected fundraising.

“I believe, although COVID-19 has hindered the number of possibilities to us because of social distancing, we have been able to really help raise the funds for the absolute necessities to start out,” Debbs said. “It could be better, but we stay optimistic.”

Adam Schiermyer, offensive coordinator for the varsity football team, is appreciative of the efforts the Boosters put into supporting the Firebird athletes.

“The role of the boosters has been a huge undertaking with a program starting from the ground up,” Schiermyer said. “They have played a huge role in seeing the vision on where the program is going and will be in the next two or three years. They have helped with the purchase of major items that all successful programs are utilizing. They also communicate with parents, organize meals, provide updates for what the team needs and handle all financial purchases.”

Gagnon explains that the concession building has the potential to bring in funding to other Firebird programs also.

Successful high school athletic programs in Arizona need to generate funding above and beyond what is allotted to them by the state and local governments in order to survive. They also need to prepare for rainy day expenses and setbacks, including those that can follow an international health crisis.

Schiermyer expects plenty of goals to be reached from the support of the boosters and has high expectations for where this program is headed.

“I think one of the main goals that a great booster can accomplish is culture for a program and team spirit,” Schiermyer said. “Other things I think great boosters do, is take away some of the stress of the logistics of a game day, such as meals and travel. ... Strong boosters have high expectations, since they are there for their kids they should. It would be nice someday that the boosters want to raise enough money to add a jumbotron to the field.”

Lamb, whose involvement at Eastmark goes back to its groundbreaking, sums up Eastmark’s efforts to raise funds for athletics during the turmoil as collaborative.

“It’s a very positive environment,” Lamb said. “It starts from the top with Mr. Gagnon and Mr. Kraig Leuschner [the athletic director] and we all truly want the students to succeed. Eastmark has this positive environment and it's very interesting how the culture has developed. Everybody here wants the students to have the best opportunities and high school experience.”