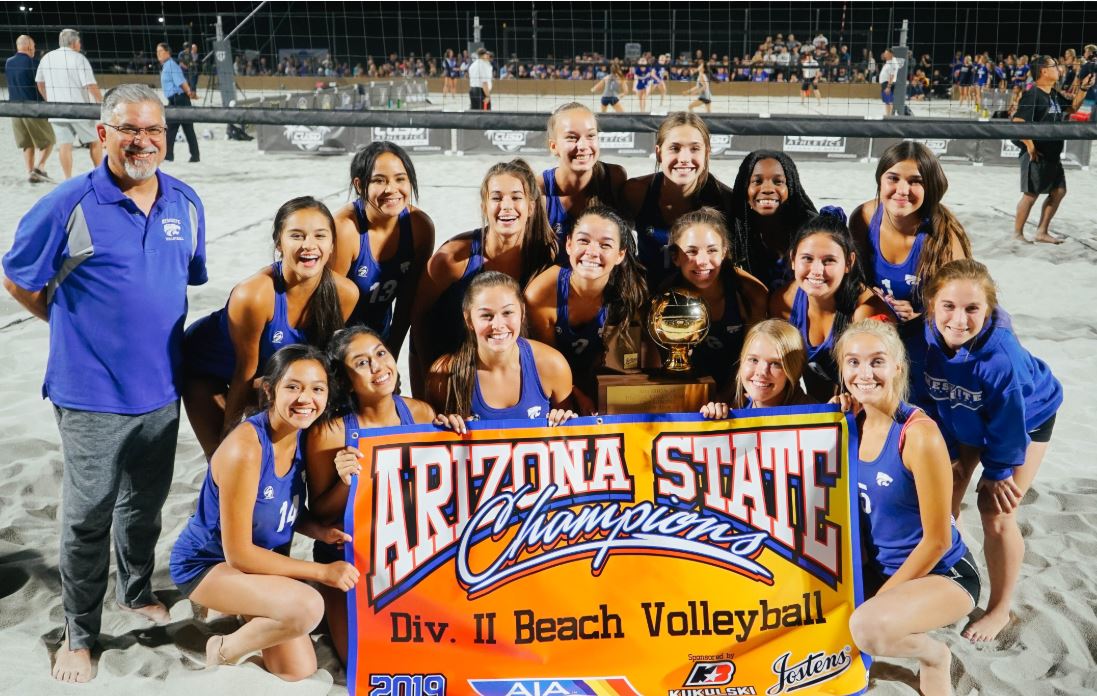 For Mesquite volleyball coach Carlos Flys, the priority is to make his players into strong, hard-working young women over better volleyball players.

Flys began his career in volleyball when he was a kid in Spain, where he was born. He then picked up coaching after his daughter, Victoria, began playing in her youth. Starting as her coach at a YMCA, he later became a club director for Aspire, one of the largest club teams in the state.

That is where he was first approached for the job at Mesquite.

“One of my players on my club team, Alicia Hielner, told me she was a freshman at Mesquite,” Flys said. “She said, ‘Hey, our coach is gone, why don’t you come coach at Mesquite?’”

Flys initially declined, deciding that he had too much going on and he did not want to get into high school. He later decided to speak to the athletic director about the job.

“I figured, 'Well, at least I’ll go talk to the athletic director,'” Flys said. “I talked to the AD and he gave me the job. Eight years later, I’m still here.”

While the team has enjoyed success under Flys, it is his impact on each player that he is most proud of. On and off the court, he works to instill life lessons through the game that every player can use.

“Volleyball in general is a great metaphor for life for these players because it is a game of errors,” Flys said. “People in life are going to make mistakes. It’s not whether you make the mistakes, it’s, 'What can you learn from your mistakes?'”

Justine Ackie exemplifies the Flys' impact. The two began their volleyball relationship when Ackie was in sixth grade and Flys was her volleyball coach at YMCA.

“He made me fall in love with the sport, he pushed me into what I am today,” Ackie said. “He saw how dedicated I was, and I saw how much effort he put in, not only having us become great volleyball players, but independent women as well.”

Flys stayed as Ackie’s volleyball coach through her high school career and she is now back with Flys as an assistant coach.

Ackie has learned from Flys as a coach and player the principles he uses to coach.

“He’s taught me that it’s not all about wins and losses, that there’s always a bigger picture,” Ackie said. “The bigger picture is to create independent, strong-willed women in society.”

Flys’s current project is team captain Annika Wallace. The two have worked together since Wallace was 14.

“I was 14, and it was my first time at club Aspire volleyball,” Wallace said. “I was so nervous.”

Flys recruited Wallace to his team and eventually to Mesquite. The greatest improvement Wallace believes she has made under his tutelage is her leadership.

“He has trained me to be a leader since the day I met him and to provide empathy and be there for my teammates and to really push myself and the team to the highest level,” Wallace said. “Being a leader and everything, the lessons he teaches me can not only get me through volleyball, they can get me through life.”

To sum up his coaching style, Flys gave the quote he said he always uses to define it.

“I coach for the relationships, I coach for the legacy,” Flys said. “I try to teach my captains to be leaders. When someone that my captain has reached out  and touched comes back to me and says, ‘Captain, so and so made me feel so good about myself, and taught me so much,’ then I know that not only have I reached one person, but the web is starting to grow.”