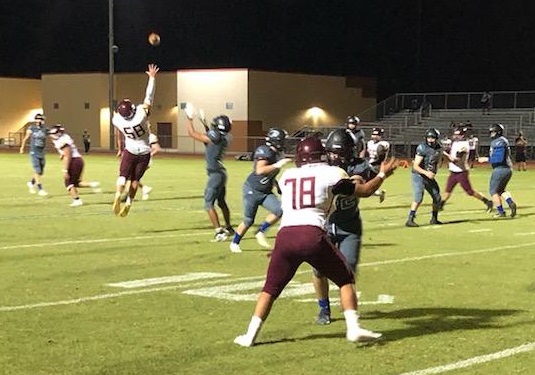 Harrell’s nine-yard slant pass to Morales was the Panthers’ only offensive touchdown on the night as Paradise Honors remained undefeated, going 2-0 for the first time in six seasons.

“Our goal in January, when I brought all of my coaches in, was just, ‘One team, one goal, 1-0 each week,’” said first-year Panthers head coach Josh Goodloe, who took over a program that had won two games all of last season. “They’ve been buying into it and just been focusing.”

Harrell found fellow senior David Berry from three yards out for the two-point conversion and the Panthers never looked back, as junior transfer Devin Tobin dominated possession on the ground in the fourth quarter.

Tobin, who rushed for 164 yards in a 50-0 win over Cortez High School to open the season, had help from two safeties the Panthers got when, respectively, a long snap flew over the head of Winslow punter Michael Dugger and an intentional-grounding penalty was called on junior quarterback Jace Lyons in his own end zone.

“I could see us going a long way, especially after Winslow,” said Harrell, who passed for 346 yards in the Oct. 2 win over Cortez. “They’re a lot better team than Cortez.”

Junior wide receiver Trey Herrmann also picked up where he left off Oct. 2, running back the opening kickoff 82 yards to jump on the Bulldogs early.

“Trey’s one of our leaders,” Goodloe said. “Last year, he had to play quarterback. This year, we were able to move him to a more natural spot.”

But the subsequent two-point conversion attempt failed, and untimely penalties and a gutty, undermanned Winslow defense kept the Panthers from any further scores until Harrell’s slant pass to Morales.

“There were some penalties,” Harrell said. “But we talked to our [offensive] line and cleaned things up, and our line stepped up and executed. Just a great team win.”

It was the defense that kept Winslow (1-1), which only dressed 28 players, in the game until senior Trevor Cavasos could get the Bulldogs on the scoreboard at the 4:21 mark of the second quarter. A sustained, 88-yard Bulldog drive finally stalled at the Paradise Honors 4-yard-line, and Cavasos’ 21-yard field goal cut the Panthers’ lead in half.

The Winslow defense forced the Panthers into a three-and-out the very next series, however. Then Lyons, who passed for 64 yards and rushed for 14 more in Winslow’s 30-8 opening-night win over American Leadership Academy, was at last able to capitalize.

A 44-yard bomb to Dugger brought Winslow into Paradise Honors territory, at the Panthers 45. After another 12-yard first-down reception by senior Aiden Kislingbury, Lyons found fellow junior Izaiah Cordova all alone 33 yards down the Panthers’ sideline.

Cavasos’ extra point allowed the Bulldogs to go into the locker room at halftime up 10-6.

“We struggled in the first half,” Goodloe said. “We got a lot of holding penalties, some blocks in the back that got us called back.

“Once we were able to get on our guys and talk to them about keeping their hands inside, moving the feet--don’t worry about their size, do what you do--I think that helped us out a lot.”

Neither team could break through in the third quarter, despite Winslow once again mounting a sustained drive to the Paradise Honors 4 and the Panthers’ subsequent first-and-goal at the Winslow 9 set up by a swing pass from Harrell that Herrmann turned into an 87-yard reception.

“When Chad gets in trouble, he looks to go to Trey, because Trey will bail him out,” Goodloe said. “The kids rally around him.”

Winslow expects its on-campus dorms that house students from the Navajo Nation to reopen Monday. As all of the schools in the Nation have cancelled their fall sports, Winslow may be the beneficiary of another 15 players that can provide immediate special teams help prior to beginning 3A East Region play.

The Bulldogs will then have to regroup by Friday, Oct. 16, when they return to Phoenix to face another undefeated 3A Metro opponent at Valley Christian High School in their final non-region test.

“We fought a lot of adversity the past two, three years,” Harrell said. “I think we really bonded today. That hasn’t been something I’ve seen since I’ve been here the first day, freshman year.”