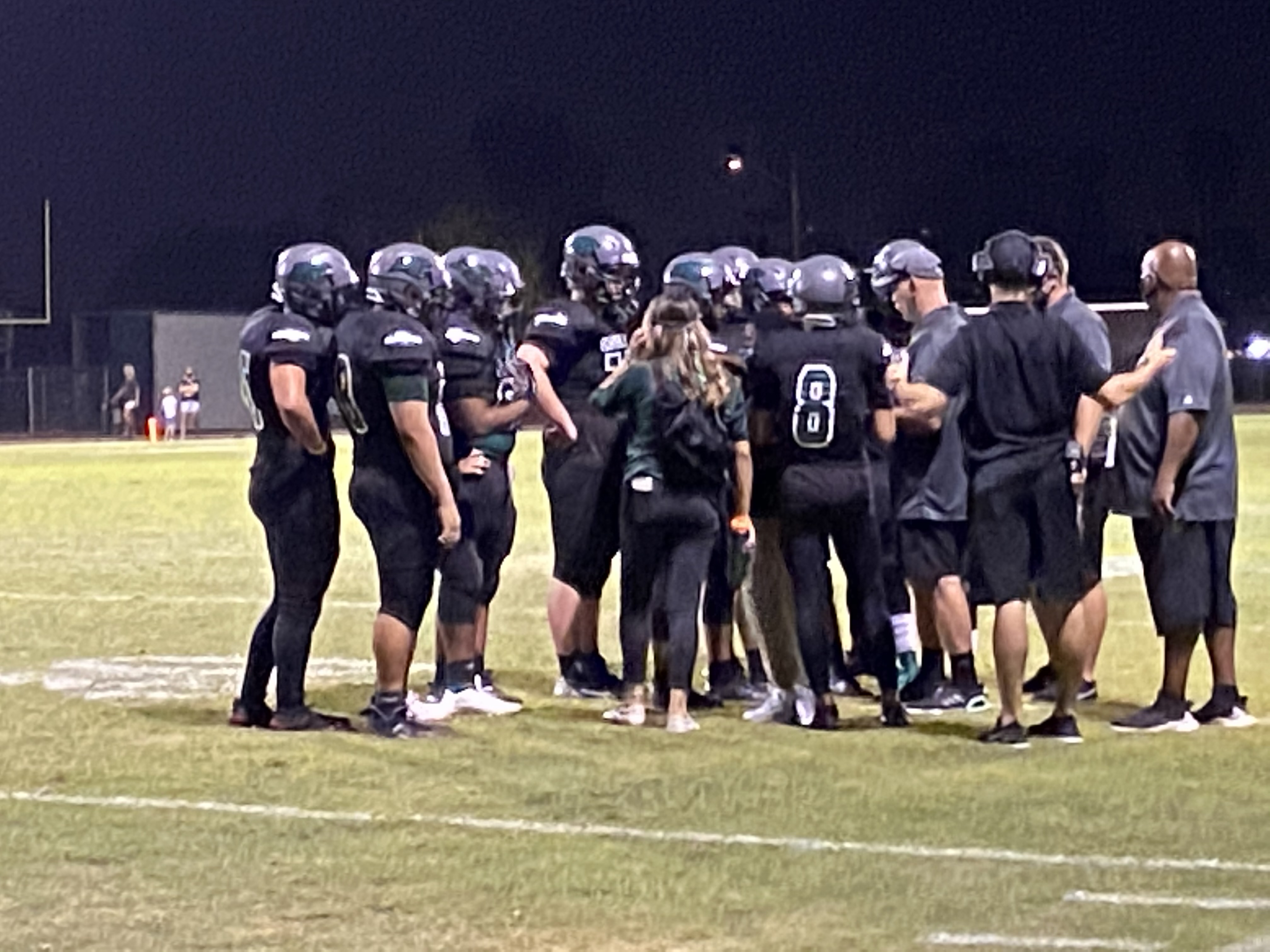 (PHOENIX) -- The Phoenix Christian’s varsity football team began its 2020 season at home against Yuma Catholic in a non-conference showdown. The Cougars suffered a tough home loss to the Shamrocks 28-20 in the school’s first-ever 3A Conference game.

The game's critical play came on a 4th down-and-seven for the Cougars as they were down eight with a little over four minutes remaining. Coach Brian Cole called his final timeout prior to the down to draw something up for the crucial play.

Senior quarterback Adrian Fleming took the snap, rolled to his left and looked for an open receiver. Before he could get a pass off the defensive line collapsed on him. Fleming was able to escape the first two tacklers and had a chance to throw the ball up but decided to hold onto it. He took a sack, effectively ending the game.

“My best receiver is Howard (Russell), number three, so we were looking for him," Fleming said. "We were kind of using him as a decoy because they were covering that corner route on the rollout. We were hoping the defense would shift and I could get my backside guy on a slant. I rolled that way and it didn’t quite work out the way we expected it. By the time I got it here I saw guys were bringing pressure, so I tried to roll the other way and it just didn’t go how we expected it.”

Coach Cole had a similar take.

“They were starting double-covering him (Russell), probably about a third of the way through the game," said Cole. "So, we knew they were going to double-cover him and we’d seen some things rolling out towards his side. Our backside guy running a crossing route had been open a couple times, so that’s what we were looking for.”

“Adrian should have thrown the ball anyways, just because it’s 4th down and better to throw it up and have a chance then take a sack.”

Throwing the ball up is never a bad idea when you have someone with the talent Howard Russell possesses. Russell, a multi-sport athlete, put his full talent on display with three touchdowns including two on his first two touches.

His first touch came early in the game off a punt return where he took it to the house. Russell caught the ball, took two steps to his right, then made a sharp cut to the left breaking the ankles of the defender and sending him to the turf. He then proceeded to run through multiple tackles before finishing the play off by viciously stiff arming a defender to the ground. His next touch was a 44-yard touchdown reception. Russell showed tremendous elusiveness in this game and has amazing, as Shaquille O'Neal would say, “feetwork.”

Sadly, for the Cougars they hurt themselves many times and were not able to overcome a bevy of mistakes in this game. The Cougars had a long touchdown in the early second quarter called back due to an offensive pass interference call on Russell. They also missed another scoring opportunity as the Cougars had the ball on a 4th-and-five at the Shamrock fifteen. PC decided to go for it and was not able to convert, turning the ball over on downs.

After Russell’s third touchdown on a jet sweep the Cougars had to take time out early in the 3rd quarter because they only had ten men on the field for the extra point attempt. After the timeout the extra point was blocked, leaving a point on the board PC desperately needed.

The 3rd down play before the game-deciding 4th down was one the senior quarterback would love to have back. Fleming had an open receiver in the slot running a fade into the endzone, but unfortunately one of Fleming’s only bad balls of the night came in this situation as he overthrew junior Jose Hererra.

Even with Russell dominating most of the game and the Cougars defense forcing two picks, it wasn’t enough to overcome their mistakes and the differential in Yuma Catholic’s roster size. The Cougars started off with resounding energy and kept it through the first half and the beginning of the second. About halfway through the second quarter PC’s absence of depth came back to haunt the team.

Hands on hips, cramping, and heavy breathing was a frequent sight of the Cougars as the game went on. Most of the Cougars play both offense and defense preventing them from getting sufficient rest.

Head Coach Brian Cole came into this game with concern over his diminutive roster. “That was my concern going up to 3A…is that we just don’t have the numbers to sustain week-to-week playing 3A schedule. So, my biggest concern is just how are we going to be able to stay healthy and be healthy at the end of the season.”

After the game Cole harped on the need to stay in shape and avoid repeating the fatigue levels shown in this week’s game. “We really stress that the guys work hard in practice. What I told them afterwards is cramping up and doing all that is just a sign that they’re not going as hard as they should. You cramp because your muscles get tired and you’re overworking them. Well if you’re not working that hard in practice…that’s why you cramp.”

Coach Cole has been around the block and has much experience in coaching high school. He spent eight seasons as North Canyon High School in Phoenix Arizona before becoming the head coach at Glendale Joy Christian for six years.

One trick coach Cole has learned over the years to help keep players injury-free is to practice in shells and leave the full pads for game days. Shells mean the players are wearing helmets and shoulder pads but not the pant and lower body pads.

The Cougars last football game was a heartbreaking 34-28 loss to Round Valley in the 2019 AIA football 2A Conference championship game. Despite the loss and PC only having about 175 students enrolled in the high school, they were brought up to the 3A Conference. The Cougars boast the smallest school in 3A and the tiniest football roster in the conference with only thirty-three students on the team.

Phoenix Christian’s football team is so small they have neither a freshman nor junior varsity team. They were looking to start off their season on the right foot against a Yuma school that went 7-5 last year and got bounced in the quarterfinals of the 3A Conference tournament.

It was a tough loss for the team, but the kids showed grit and heart as they never quit no matter how tired they were. “We’ve built a culture here where we expect to win. Whether we have thirty kids or fifty kids we expect to win.” Coach Cole described his program during practice this week.

He’s not wrong as the Cougars have a combined record of 34-6 in his three-year tenure including a 12-2 state championship runner up performance last season. With a track record like this you can expect Phoenix Christian to bounce back next week on the road at Valley Christian High School.

Teams tend to learn more about themselves in losses then wins as you see what your team is made of. If this team can clean up the mistakes and work on their conditioning, they will be a force to be reckon with in 3A.

This team had high expectations coming into the season and even after the loss the expectations remain the same: Win. Yes, it is a tough way to start the season but all of PC’s goals are still ahead of them.

As Coach Cole loves to tell his team, “It’s not where you start, it’s where you finish.”