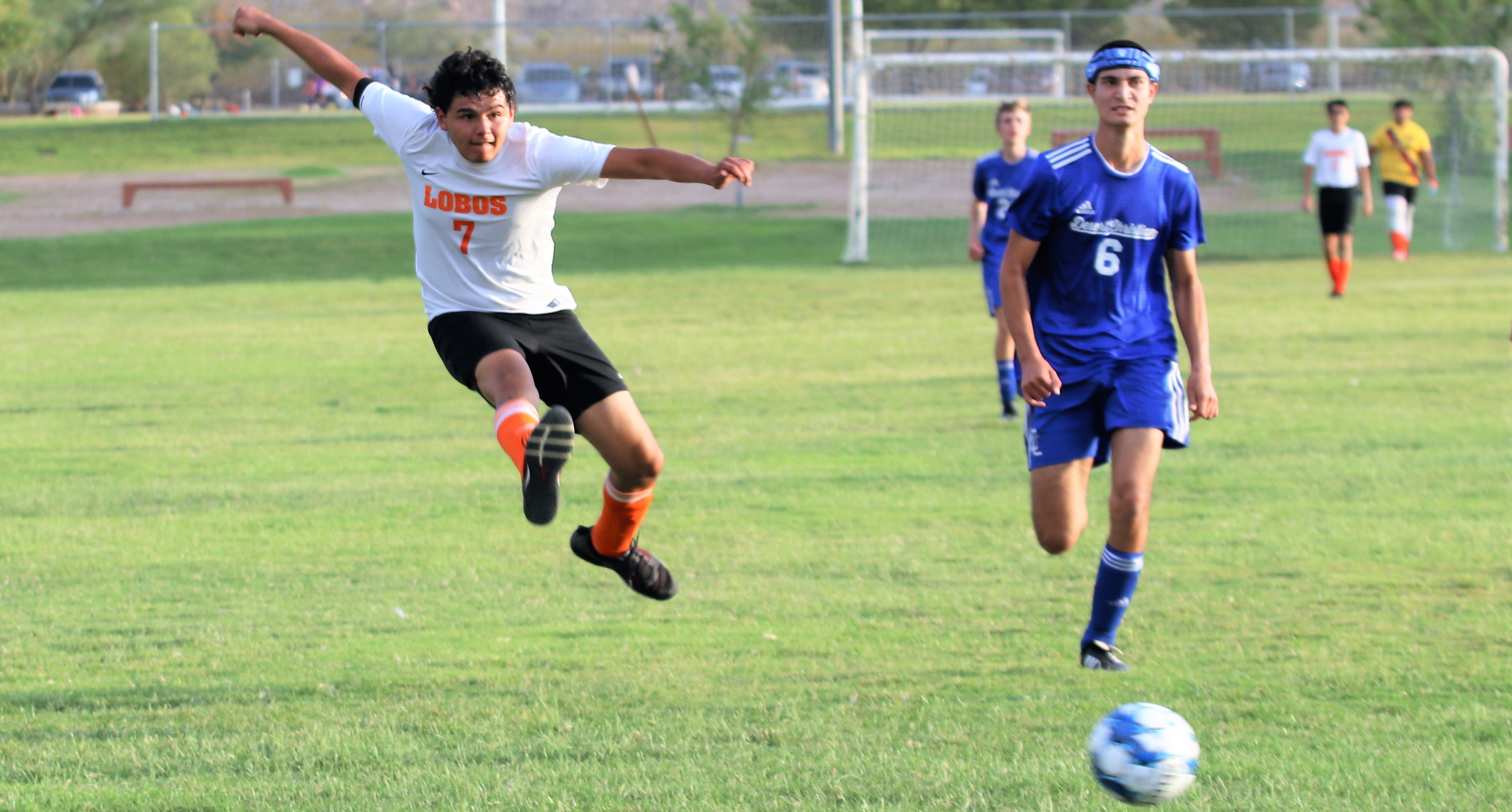 Lalo Aguilar with the score for Patagonia (Andy Morales/AZPreps365.com)

The 2A Conference Fall Soccer season started on Wednesday, Sept. 16 with a couple of matches in the northern end of the state and Willcox hosted Blue Ridge a couple days later to start play in Southern Arizona. The Tucson area got in on the action on Monday with Patagonia making a visit to Udall Park to play Desert Christian.

The Eagles moved to 1-1 on the year after beating the Lobos 2-1 to mark the first sanctioned high school event to take place in the Tucson area since the state was shutdown last spring due to COVID-19 safety protocols. Girls volleyball starts on Tuesday, Sept. 22 in Southern Arizona.

Desert Christian lost at Sedona Red Rock 6-2 last Friday and the match at Desert Christian was the first of the season for Patagonia. In the 2A Conference, teams must play a minimum of 10 games to qualify for the state playoffs this fall and the three region champions will earn an automatic berth for a total of eight teams (five at-large) advancing to the playoffs.

Willcox won the 2A South Region last year, Camp Verde won the 2A Central Region and Blue Ridge won the 2A Eats Region. As the top seed in 2019, Blue Ridge went on to win the state championship 3-0 over No. 2 Chino Valley. It was the 10th title for the program from Lakeside but the first since 2012. Chino Valley ripped off four in a row after that season and then Phoenix Country Day won back-to-back championships in 2017 and 2018. Phoenix Country Day moved up to the 3A Conference last season.

Sophomore Hayden Taiz scored on a deflected shot in the 10th minute (David van den Housel) and the midfielder scored again three minutes later on a shot from about 20 yards out to put the Eagles up 2-0 early. That was all the offense the Eagles would need the rest of the way but the Lobos kept the pressure on with 16 shots in the match and team captain Lalo Aguilar broke through in the 51st to cut the lead down to 2-1.

“We all get along well,” Taiz explained. “We are like a family and we do a lot of activities together because our school is so small so we help each other out. We just need to work on communicating on the field.”

Desert Christian put together 25 shots but Alex Santos came down with 10 saves to keep the Lobos in the game. Senior keeper Michael Steckler had 10 saves also.

Like Taiz, Aguilar feels communication is an issue for the Lobos.

“We haven’t spent much time playing together with all the new players and this is only our first game,” Aguilar said. “We need to communicate more and get used to playing with each other and we played pretty well today.”