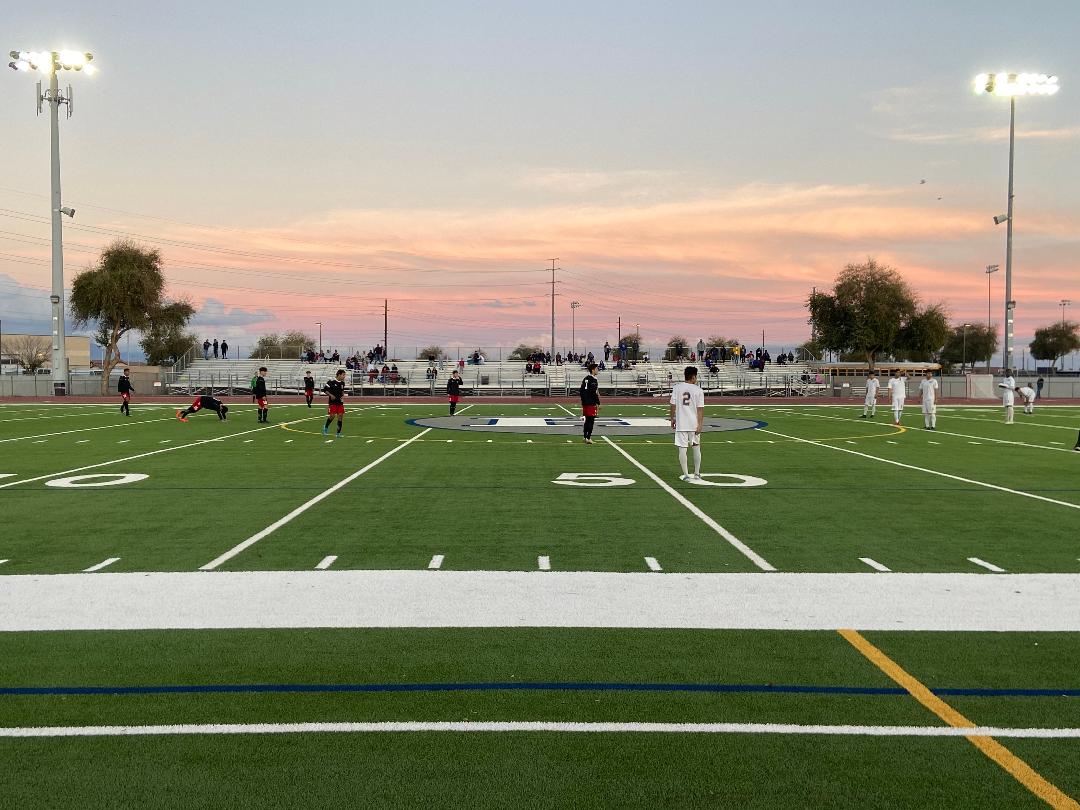 It took all of regulation and both overtimes to decide who would be meeting No.1 seed Sunnyside in the 5A championship game.

And in the 95th minute, junior forward Edwin Yepiz scored the goal that would ensure Carl Hayden would be there as they knocked off the No. 2 seed Ironwood (Glendale) 1-0 in their semifinal matchup Saturday.

“It feels amazing,” Yepiz said. “We haven’t been in the championship for about 10 years and we haven’t won a title.”

The first half was highlighted by yellow cards, two of which were given to Eagles senior defender Gabe Guerrero resulting in a red card and disqualification, leaving Ironwood short-handed the remainder of the game.

But Ironwood and Carl Hayden remained tied heading into the half in what was quickly turning into a defensive stalemate.

In the second half, yellow cards were evenly spread with Carl Hayden collecting two and Ironwood picked up its fourth of the game.

But between the second half and second overtime, Carl Hayden would be within mere inches of jumping out front. Two shots off the front post and another off the corner post would keep this game tied at 0-0.

A free kick within 15 yards presented the best opportunity for Ironwood to end this game in regulation, but the shot sailed over the bar with 1:05 left and all but guaranteed overtime.

After Eagles forward Ricardo Cardozo exited about halfway through the first overtime with a cramp, Carl Hayden really began to apply the offensive pressure as they controlled time of possession throughout the first overtime.

The Falcons would have the best opportunity to score in overtime with one of their three near-goals occurring in the frame. One was a cross-in from about 30 yards out that hit the corner of the crossbar.

The Falcons refused to let up and in the second overtime it would finally pay off. An Ironwood miscue deep within their own territory proved to be detrimental as Yepiz quickly capitilized and turned that miscue into the games lone goal.

“I’m proud of my boys,” CHHS head coach Abner Calderon said. “They bought in, they believe, and when you have boys that believe, they do it their own way and I just need to channel it in the right direction.”

Before Ironwood would get a chance to respond and salvage their season, Eagles senior defender Nate Guzman let that frustration be clearly known and was given a red card.

Through everything the Eagles had been through in the second overtime opportunities to level the score were still there. A missed shot by Eagles sophomore midfielder Adrian Osornio from about 10 yards out would roll across the face of the goal. Moments later that opportunity for Ironwood would repeat itself just on the opposite side of the goal with the same result.

Ironwood’s season would be capped off by a corner kick that bounded off an attacker in the box and almost broke the goalline. But the Eagles didn’t get the benefit of the doubt and their season would end so close to a shot at the championship.

“I just want to take my hat off to Ironwood,” Calderon said. “Nothing short of a worthy opponent and nothing has challenged us like the way they did.”

Carl Hayden, on the other hand, now finds itself in the 5A championship game against a goliath in Sunnyside. The Blue Devils have only one loss on the season and are undefeated against Arizona teams this year, fresh off a 5-2 semifinal win over Sunrise Mountain, and would like to retain its state title.

The championship game is set for Tuesday at Marana Mountain View High School and will be streamed via webcast for NFHS Network. Kickoff set for 6 p.m.