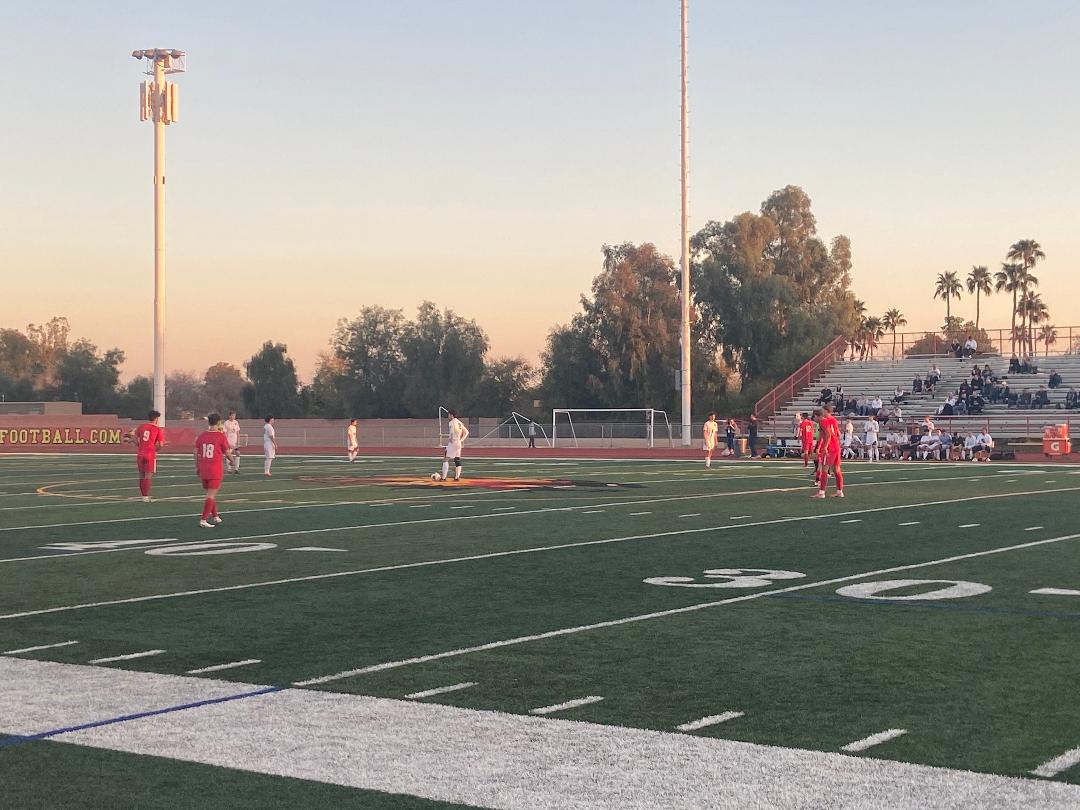 In a game that couldn’t be decided in regulation (or two overtimes), Chaparral never led until the final shootout kick, resulting in a 2-1 win for the Firebirds over Desert Vista, cementing their spot in the semifinals on Saturday.

Chaparral found themselves in a similar position to last week’s 2-1 victory over Mesa that also saw the Firebirds trailing 1-0 early on.

This time around the result was a Vicent Larente header for the Thunder that skimmed over the outstretched hands of Chaparral goal keeper Cole Johnson in the first half. Contrary to the score, the Firebirds were in control of time of possession. And while opportunities were present in the first half, Desert Vista took a 1-0 lead into the break.

That elusive goal for Chaparral was found only two minutes into the second half as Firebirds forward Aysa Hamid responded with his own header off a break and cross into the box by team captain Tyler Bertram to level the score at 1-1.

“We’ve been down before, so we really never hit the panic button,” Chaparral head coach Jason Spiers said. “(We're) an experienced team so they know how to come back when they are down.”

The rest of regulation saw multiple opportunities for both the Firebirds and Thunder to deal game-changing goals, but none closer than a Chaparral shot by Sebastian Mentis that just missed the face the goal near the end of regulation.

In the first overtime, a shot on goal from about 25 yards out by Chaparral midfielder Ryan Pace presented the only possible chance of game ender, although the first OT concluded on the hinges of an offside call that halted a Firebirds break.

The second overtime featured Chaparral on the counter attack and Desert Vista nearly taking advantage of a hand ball, but neither team could find the back of the net.

“I felt like we had a bunch of chances. We just weren’t finishing them,” Hamid said. “But watching everyone else in PK’s I had total confidence in everyone that we were going to make it.”

Back-to-back saves by Johnson saved the Firebirds' season, while also providing a bitter ending to an underdog postseason run by the Thunder who had just upset Corona Del Sol 1-0 in the first round.

“I cost us the first goal,” Johnson said. “I needed to come back and win it for my team. I know we’re better than getting knocked out in the quarterfinals. We just had to get through.”

Chaparral now eagerly looks ahead to its semifinal rematch with the third-ranked Hamilton Huskies, who bested the Firebirds 1-0 in their regular season opener back in December.

The Huskies are coming off a 1-0 win in their quarterfinal matchup with Copper Canyon, setting up this battle between top seeds on Saturday, with a live webcast via the NFHS Network.