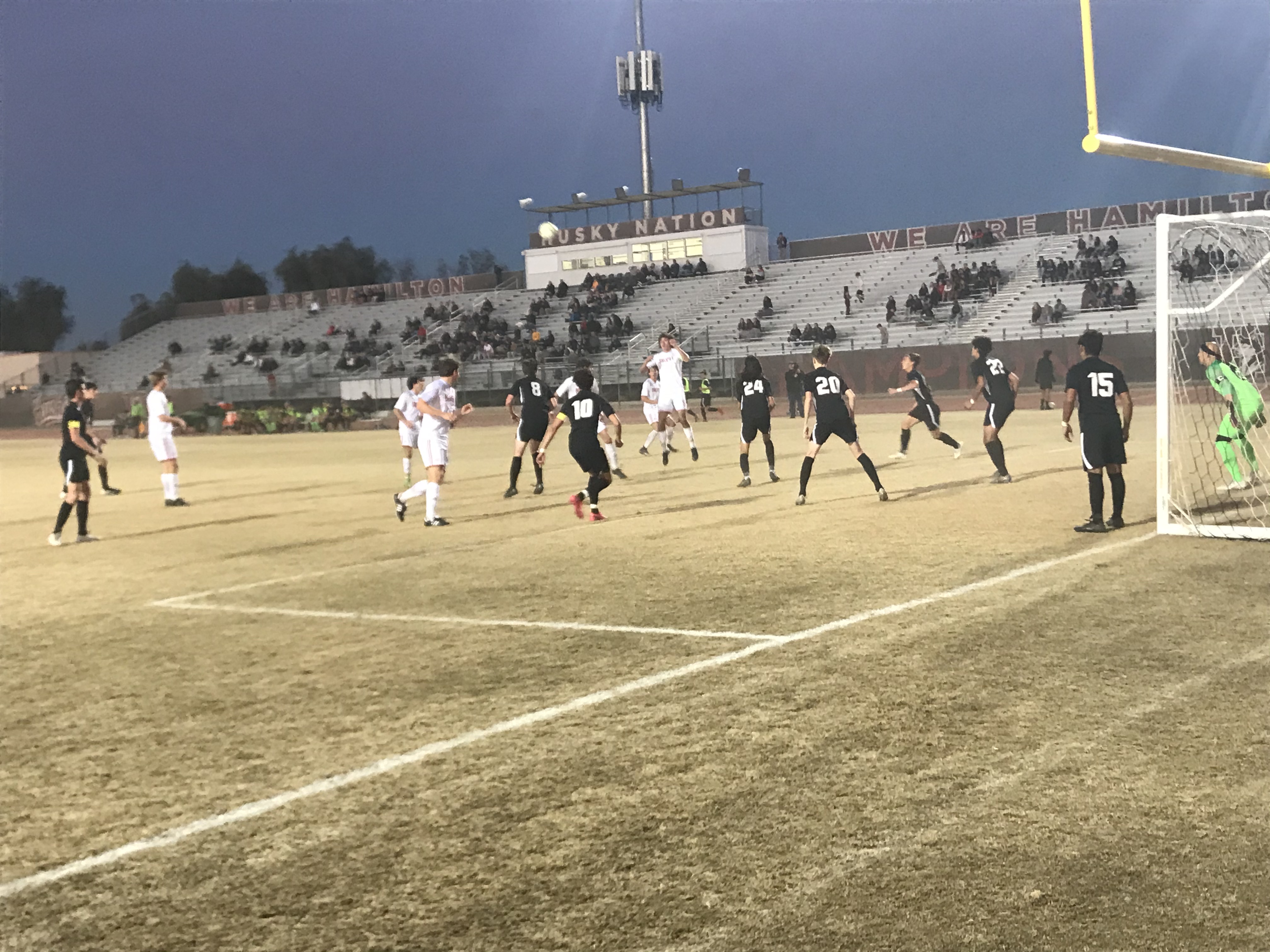 Defending champion Brophy (light jerseys) and Hamilton are two of the semifinalists competing this weekend for a berth in the 6A finals. (AzPreps365 photo).

The 6A boys soccer tournament was rocky for some of the top seeds in the opening round, but the higher seeds that remained have taken control with the semifinal round on Saturday February 22.

No. 1 seed and defending champion Brophy has looked every bit the favorite with confortable wins in the first round and quarterfinals. No. 2 Chaparral and No. 3 Hamilton were pressed hard in their two wins to reach the semis with three of their combined four matches going overtime or to PKs. The surprise team - at least by seed and not win-loss record is Red Mountain. The No. 12 Mountain Lions upended Sandra Day O'Connor and another upset winner in the first round in No. 13 Cibola in the quarters.

Here's a breakdown of the semifinal matchups:

Hamilton (14-3-4):  The Huskies are seeking their seventh trip to a title game in school history and have won two in the past. Seniors Max Lipman, Crew Marin and Tracey Angeli and juniors Adnan Laurousi and Riley Lynch have been credible leaders for coach Lance Thompson in his second season at the helm.  Hamilton's success, according to Thompson, stems from the program's culture created and maintained by the players. Top scorer this season for Hamilton is sophomore Luke Schaefer (15 goals, 5 assists). Other stat leaders are Lynch (5 goals, 6 assists), Laurousi (7 goals, 4 assists) and Josh Martinez (8 assists).

Chaparral (13-2-1):  Chaparral has qualified for the playoffs each of the last four years with a variety of finishes. Last year the Firebirds bowed out in the 6A semis to Brophy. They were runner-up to Campo Verde in 5A in 2018, lost in the 5A quarters to Independence in 2017 and were felled in the D-I first round by Campo Verde in 2016. Chaparral has never won a boys soccer title outright. They shared a 4A title in 1998 with Rincon. Ihe Firebirds have participated in a championship match eight times in school history ranging from 1983 to 2018. Goal keeper Cole Johnson's save in the marathon shootout with Desert Vista netted Chaparral its semifinal berth. Chaparral is led by senior center back Andrew Bebbington, Johnson in goal and sophomore forward Aysa Hamid, who has 12 goals 10 assists.

Red Mountain (18-3-2):  Red Mountain is in the semis for the first time since 2009 when it finished runner-up to Highland. Its best finish prior to that was runner-up in 2005. The Mountain Lions advanced to state last year after missing the tourney nine years in a row. They were ousted in the quarters last year by Brophy via a late Broncos' goal. Top players and leaders are senior midfielder Carson Standridge, senior center back Julian Cardenas and senior center midfielder Diego Garcia.  Red Mountain returned 10 of 11 starters from last season and has added some solid sophomores to the mix. Leading scorer is James Koufidakis (22 goals) and Luke Hanes, Ryan Galloway and Casillas with eight apiece. Galloway is the assists leader with 7. Koufidakis scored in the 2nd minute in the quarters vs. Cibola and Diego Casillas won it with two minutes left with a goal from near mid-field.