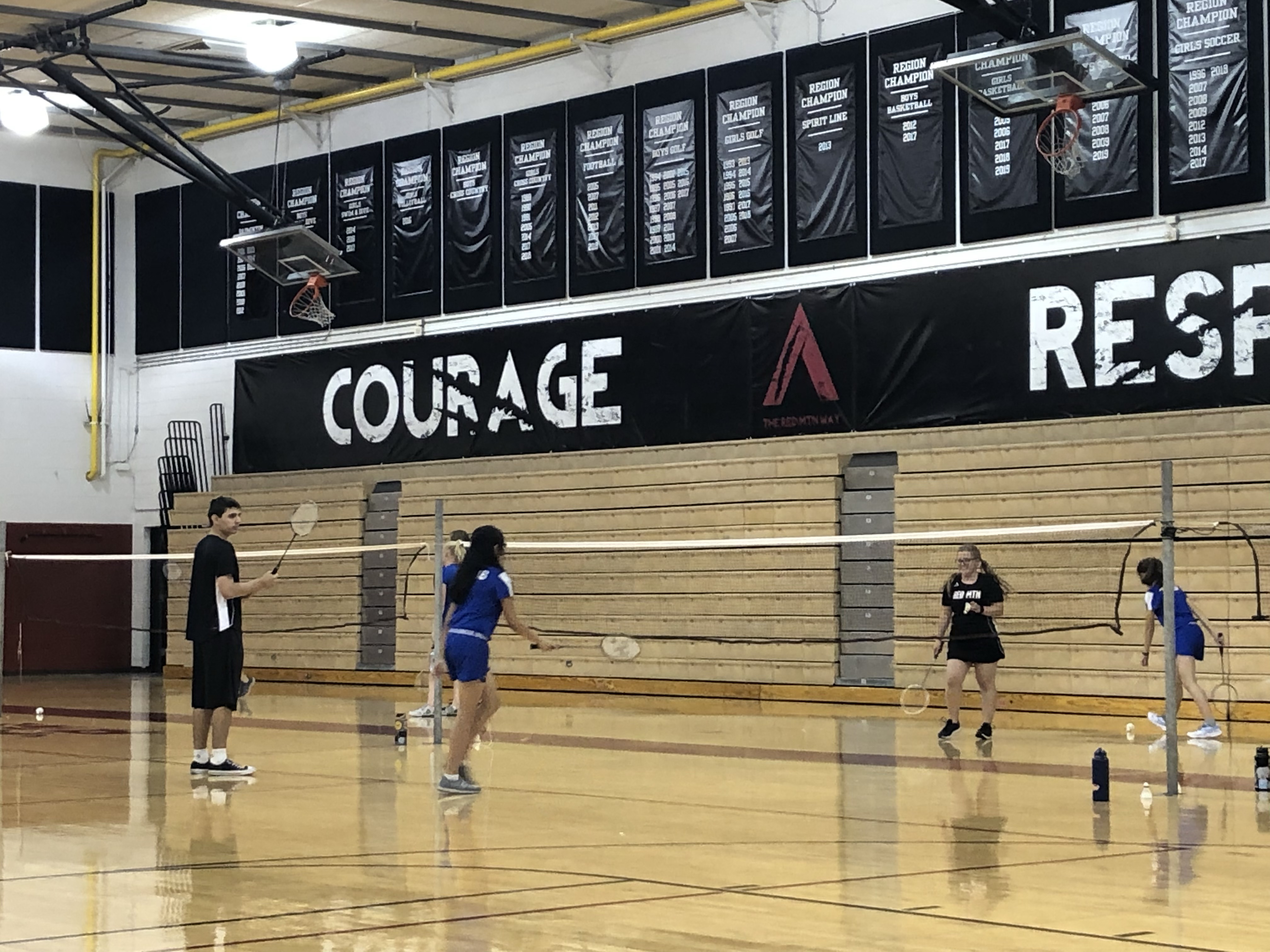 Emily playing during an away match in the 2019 badminton season. (Photo courtesy of Sue Crotty)

In August, the athletic director of Mesa Public School District announced that he would like to start including unified sports, first with badminton.

Many of the badminton coaches in the district were unsure of whether to jump right on board. They had questions and fears about mixing special needs P.E. with badminton.

Tricia Ellsworth had neither. The Mountain View coach knew this was something she wanted her team to be a part of.

After all, she is unique, teaching a special needs P.E. class and coaching badminton.

She was the only one who had relationships with both students.

“Most of the badminton coaches said they would reach out to the P.E. teacher and see if they knew anyone,” Ellsworth said. “I didn’t have to communicate with anyone. It worked out really well.”

She knew the challenge would be finding the right person to join the program. Ellsworth stressed having the parents support was essential in deciding who to invite.

Her focus went to Emily Crotty, a senior with special needs. Ellsworth has known Emily for four years and had her in previous P.E. classes. She knew Emily’s parents would support her.

“I knew that she has this desire to do things well, so she’s willing to work at it,” Ellsworth said. “I think that’s what led me to think of her in the first place knowing that she would be coachable, and easy to fit into the team and just seeing her go from hardly hitting a birdie to competing competitively in an entire match and having that much skill and focus was amazing. Definitely seeing her ability and not her disability.”

“I was thrilled because Emily's really never had an opportunity to do something like this. So, it was huge. It was huge, I was right on it, I said sign her up.”

Finding her the partner was another key component to help Emily grow as a badminton player.

It was important for Emily to have the same partner each time to gain security. That person was Jessica Ludlow and she became one of Emily’s friends. 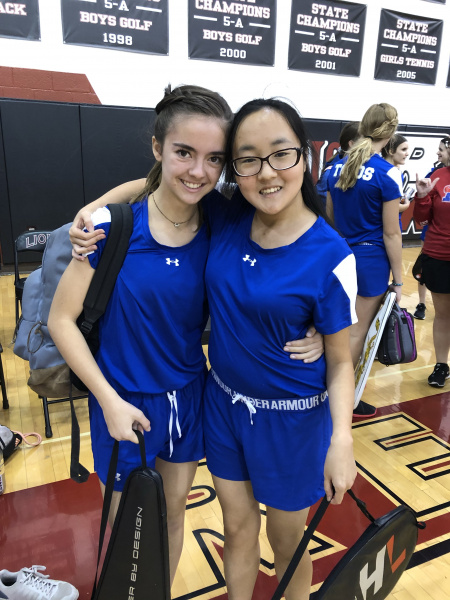 Emily and her partner Jessica. (Photo courtesy of Sue Crotty)

Jessica had played badminton in previous years but made an elite choir this year and was unable to commit fully to the team. But this allowed her to still be a part of things. Jessica and Emily came to practices every Friday.

Ellsworth moved Emily into her racquet sports class, where she played badminton every day and also worked with one of Ellsworth’s student aides who was on the team. This allowed her to get more practice in a controlled situation on a daily basis.

Not only did Emily come to practice on Fridays, she also played in home matches and traveled with the team to away matches against other Mesa schools. Even if a school didn’t have a unified player, they provided an exhibition team for them to play against.

Ellsworth said getting to ride on the bus was one of Emily’s top highlights.

“She’s the sweetest young lady, so positive, so coachable and we saw huge improvement from the first part when we were having trouble getting her to make contact to the end where she was staying involved in rallies for six, seven, eight times in a row,” Ellsworth said. “It was great to see all the improvement.”

Emily’s mother never missed one of her matches and felt many emotions.

Ellsworth knew her team would also gain an experience with Emily part of the squad.

“It was a wonderful thing for all of us to just see each other as these wonderful people and teammates, instead of this person having a disability. We’re all on one team and we’re all here for each other. I don’t think there was one negative aspect with her trying this for the first time.”

With the success Emily enjoyed, the future of unified badminton is bright.

Sue thinks it’s been too long since something like this has been introduced.

“They should have been doing this a long time ago,” Sue said. “I'm just really happy to see that. I'm sad that Emily's a senior this year and that she won't get to do it again. They need to continue this. It's good for the child with autism or whatever special needs that they may have. It helps them to know that they're not singled out. It's good for the other team players as well. I think it brings out the good in them and to have them be able to help somebody, and to see what joy that brings that person that hopefully it will make them happy forgiving of themselves as well.”

Emily was thrilled with her experience.

“I loved it,” Emily said. “It was such a wonderful experience for me, the team, the badminton and I was a little competitive. I loved every single detail of the game and trying to hit the birdie. It was really awesome that they let me be a part of that experience.”

Ellsworth hopes next year one to four students will become involved and all Mesa schools will have a program. She said that she believes they had a 100 percent positive experience all the way around with Emily.

“On a weekly basis, Emily brightened our day and made everyone feel proud to be a part of Mountain View badminton,” Ellsworth said. “I think the hard part is to find another student who will fill the shoes of Emily because she started us out on a very high level. That’ll be a little hard to try and replace her, but we had a great season and I’m so happy we were able to involve her and involve my team in this unified concept.”