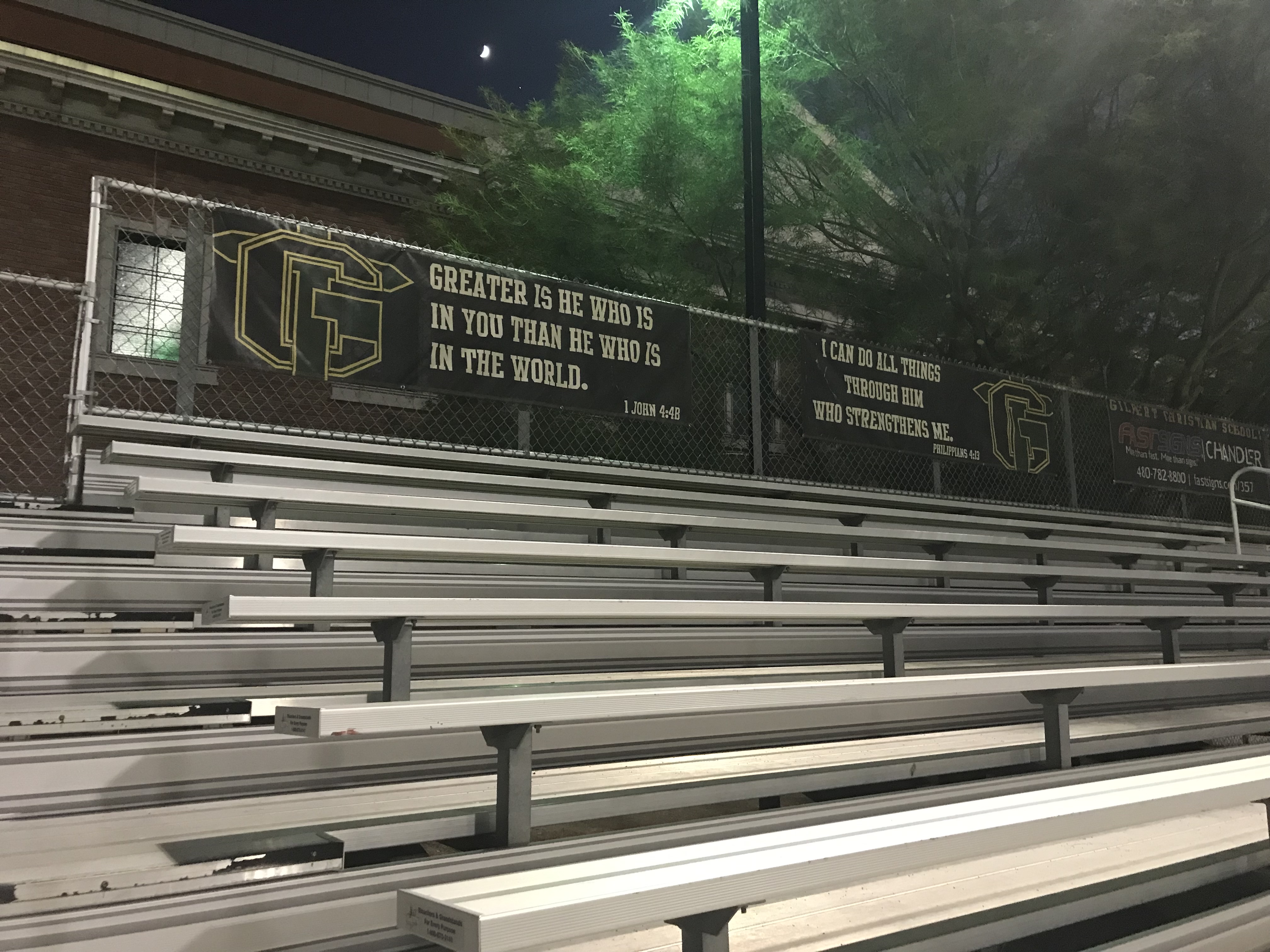 The home field at Gilbert Christian football looks like the classic high school football field. It has posters of prominent players and ads from local businesses and companies outlining it. Two sets of small bleachers accompany each sideline. A brick building that hosts concessions splits the home side bleachers. Also lining the field though are six other items fastened to the metal fence. They're bible verses.

"Being that it is a Christian school, we put God first," head coach Danny Norris said.  "God is at the center of everything that we do.

Sports are secondary at the East Valley school.  Athletes, coaches and everyone involved with the athletic department see activities as something that can only further strengthen their religion.

"We're just afforded the opportunity to play a sport and we think football is a tool that we can utilize to spread the gospel and spread the good word," Norris said.

The input of religion into the team doesn't just make them better on the football field, but off it too.

"We're much more focused on us being better men, us growing up to be Christian leaders and people in our community," said senior captain Connor Swingle, who plays offensive line and linebacker.

Norris tries to emphasize that as much as he can.

It's evident.  A team prayer concludes every practice.  Prayer occurs before and after every game, with the postgame prayer featuring Gilbert Christian and its opponent.

"There's really nothing greater than a bunch of guys and a bunch of women coming together and sharing the gospel and speaking the good word," Norris said.  "Prayer for us is a tool that we can use to get closer to one another and more so have the spirit within in us.

The prayer with the opponent following the game may seem like an oddity, but senior captain Jacob Jones, who plays tight end and linebacker noted the coming together of two teams isn't that irregular.

"It's a brotherhood out there," he said.

Quality control coach Bob Hershey also hosts a pre-practice bible study session on Thursday, which is popular among players.  The slogan "For His glory" is on the back of practically every piece of Gilbert Christian athletic clothing, and it's taken to heart.

"Football is such a team sport," Swingle said.  "No one is really getting the glory on their own.  Everyone has to work together. Here, it's about the team, it's about God.  The good things we do on the field, it's all attributed to God. We wouldn't be able to do anything without him.  He gave us this field. He gave us the sport of football.

"'For His glory means all that we do should be according to his word and his will and the way that we carry ourselves on the field, off the field, outside of the school and in our communities," Norris added.

So when Swingle was training for the season over the summer, exhausted with "nothing left" in the blazing Arizona sun, he knew he had one thing that would help get him through it: the posters.

"It's always something you can thrive off of," he said.